How to Make Espresso at Home? Learn to Pull a Shot in 5 Easy Steps

If you’ve landed on this page, you must be in need of an effective and step-by-step process of making espresso at home, aren’t you?

Let’s face it; espresso is hard, unless, of course, you have a beginner’s guide that is as clear as the water you use in the coffee-making process.

Making espresso at home is not a piece of cake as it requires the perfect amount of ingredients, timing, brewing, grinding size, grinder type – blade or burr grinder, among other noticeable considerations.

Don’t forget to use fresh beans over pre-ground coffee if you don’t want to miss the fresh aroma in your coffee. That’s because if you decide to use pre-ground coffee, you might be having contamination issues if it’s been quite a few days.

Espresso lovers like to take a sip of the most delicious and flavorsome coffee while they’re on the go watching a movie or doing some work on their laptop – no one wants to experience a stale coffee when they know that they can get a good-tasting one.

While there exist tons of ways of making different types of coffee, this thorough guide is only dedicated to those who are addicted to the unique strong black coffee – one that has an exceptional brewing method – the Espresso.

With a Machine or Without One? 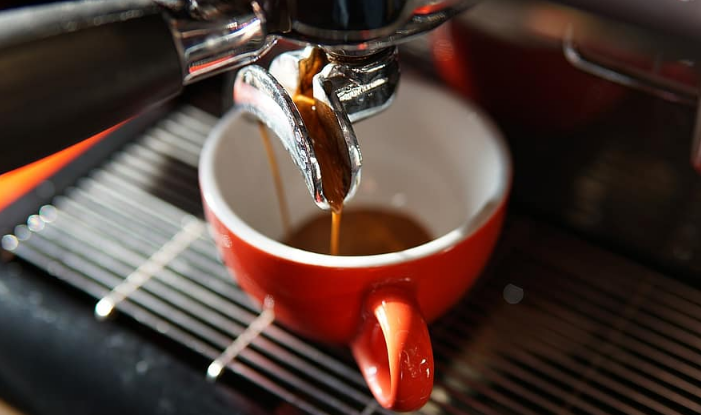 How you brew your coffee is important – i.e. with a machine or without one.

Unarguably, the taste that you achieve using a coffee maker with grinder is beyond explanation because it allows you to grind your whole fresh coffee beans at your own pace (offers you the opportunity to choose grind size). And, we know it that whole coffee beans get the upper hand over pre-ground coffee when it comes to full-of-flavor coffee with a distinctive aroma.

How to Make Espresso at Home with a Machine?

If you’re an Espresso lover and look forward to enjoying out-of-this-world espresso taste in every sip, paying heed to this step-by-step and comprehensive guide to make Espresso at home with a machine is totally worth it.

First things first. For a good-tasting coffee, experts recommend that you use whole coffee beans, instead of pre-ground coffee. Pre-ground coffee might be worth the shot if you’re making espresso without a machine or don't want to put any extra efforts.

Whichever coffee brand you consider, it’s crucial that you consume the beans as earlier as possible because if the packaged has been opened and you don’t make use of the beans in short time, the Espresso you make, for sure, will not taste better.

When you purchase coffee beans from the market, make sure they were NOT roasted within the last day or two because beans that have been roasted a couple of days ago will release carbon dioxide. You can check the roast date label on the package to make sure it’s been around 10-12 days since they were roasted.

Since you’re not using pre-ground coffee, the next thing you need to do is grind the whole coffee beans using a coffee maker with a built-in grinder. If you don’t have that, you can use a grinder-only machine separately for grinding.

To ensure that you’re doing an accurate amount, you can use a digital scale or something akin to that.

Another important aspect to keep in mind is that water passes through the espresso evenly, and to achieve that, you can press down the espresso into the portafilter lightly i.e. tamp it.

Using water that’s properly heated is important because if you use water from a tap, it can lead to clogging and you will need to descale the coffee maker more often. The machine should be heating the water between 92 and 96 C.

If it’s about extracting a single shot, you have to make sure that you’re not letting the shot brew for more than 20 seconds, whereas, if you would like to make 2 shots, you can go about 20 to 30 seconds without any hesitation.

A perfectly pulled shot will have lighter blond tones. If the shot that you’ve pulled looks light in color, odds are it will taste a bit sour and it also shows that you need to grind finer than you did before.

With a bit of luck, we believe that your coffee maker has a built-in milk frother, however, if that’s not the case, you’ll have to use a separate milk frother.

Though we recommend using full-fat cow’s milk (for sweetness), you can find different milk alternatives in the market that are made for baristas. It’s recommended that you pour milk into the pitcher to your finger’s width. It’s also important to purge any condensation for which you have to turn it for a while otherwise, you will be getting a couple of dribbles.

When you start frothing, you’re suggested place your hands on the pitcher so as to feel the temperature of the milk. The moment you turn it on, you need to bring the pitcher to a lower level so you could move the pitcher away from the steam wand. In the meantime, you will also hear a hissing noise which happens of the air being introduced into the milk.

Castillo recommends that you should hold the steam want off-center so that a whirlpool effect can easily take place inside the pitcher. After a while, the pitcher will start to get your hand temperature and that’s when you need to check that it’s reached the desired consistency.

Once you’ve achieved the consistency, it’s time to give the wand a little bit of purge to acquire the sanitary.

While frothing the milk, the essential key is the heat. If it’s too low, the foam won’t stick together, or it’s too much, the milk will taste awful. The more you practice, the better you will be at doing it like a pro barista.

Pulling a shot on an Espresso machine requires days of practice to master the art. But to start it from scratch, you can refer to the guidelines laid out above. If you’re using a coffee maker with a pressurized portafilter, tamping can lead to clogging. It’s, therefore, strongly suggested you read the instructions that came with the machine to make sure nothing goes wrong.

Get One Before It's Too Late!

That's because the best time to grab these Best Coffee Makers With Grinder is NOW because they might be available (in stock) today but no one knows if they're gone tomorrow - i.e. out of stock, or worst-case scenario, discontinued by the company.